Intel, as you may already know, is a global leader in semiconductor technology. Although they’ve fallen behind their major competition AMD, they hope to turn things around with their Rocket Lake processor lineup.

Now give the poor processor supply in the market, should you even consider looking at the best Intel 11th gen CPUs. Absolutely! 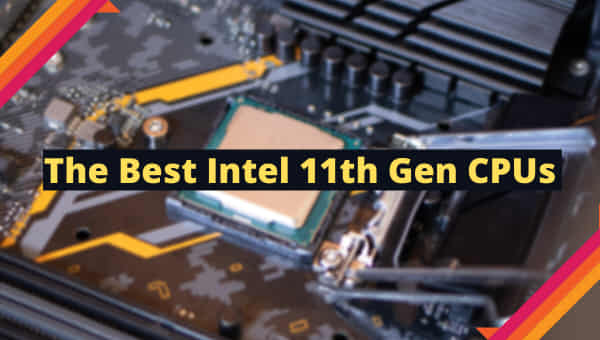 Because of the recent pandemic situation, we are all forced to conduct and continue the ‘Work from Home’ routine. And for this reason, the number of DIY pc builders is on the rise. As a matter of fact, the number is still growing exponentially.

For this reason, manufacturers cannot guarantee a proper flow of products in the market.

In this situation, we believe you should have proper knowledge of all the CPU offerings from Intel. After all, if you are planning to build a career out of gaming and streaming, Intel may as well be your first choice because of the unbeatable clock speeds.

In a Hurry? Check out Our Recommended CPU.

So, let’s take you for the journey and show you the best Intel Rocket Lake processor options you can buy.

We have tested and benchmarked the latest intel Rocket lake processors. And after this extensive research here are our recommended best Intel 11th Gen CPUs:

The i9-11900K is among the best Intel Rocket Lake CPUs you can get your hands on. As a matter of fact, it is the best gaming and rendering CPU from Intel. This processing powerhouse packs a lot of punch when it comes to RAM mainstreaming computing. 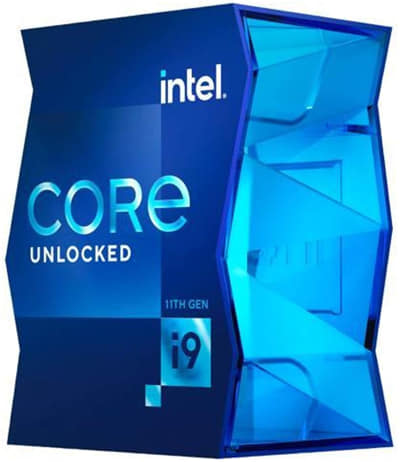 From the looks of the CPU features, it is clear that this CPU doesn’t leave anything out. For Premiere Pro rendering, it is one of the best options right now. Thanks to the solid processing cores, render times are significantly lower than some of the other offerings.

Though the CPU temperatures are a bit toasty, the features outweigh this setback. The 4k rendering and gaming performance are right on par with some of the other competitor offerings. And thanks to Intel’s industry-leading thermal design, you get a sustained 4.6+ GHz frequency all across the cores.

This results in smooth gaming and video editing and rendering performance as a whole.

But, as you are using the highest-end offering from Intel, you may want to use a Z590 11th gen Intel motherboard to get the best performance. After all, you’d want to have the full overclocking potential for your CPU and RAM, won’t you?

The i9-11900 is one of the Best Intel 11th Gen processors you can get for the money. As the name suggests, it is a locked SKU. So, you’d not be able to overclock it further than its highest Thermal Velocity boost. Still, for the value, you are getting a solid rendering processor for the money. Once you see the feature set, you’ll see what we’re talking about. 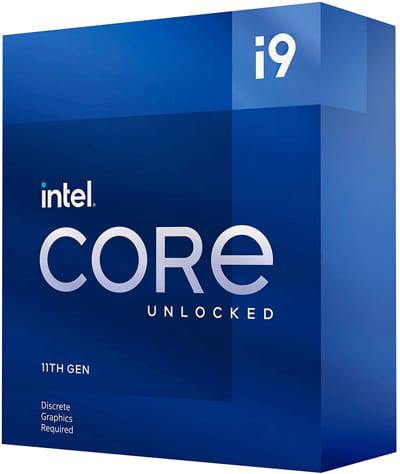 Highlighted Features of the Intel Core i9-11900

Now that you’ve had a look at all the features, the potential of the 11900 should be clear to you. This 8-core monster will help you churn through enemies in gaming thanks to Intel’s higher clock speeds. Higher clock speeds also play a role in dishing out quick video renders.

As you can see, this 65-watt processor has a lot to offer. As a matter of fact, the RAM overclocking capabilities with a supported Z590 motherboard can allow you to increase the overall performance output.

So, having a locked CPU can be a deal-breaker for some. But you may want to consider the performance aspect of this CPU. You may want to think through the features properly. Also, read our review on the best RAM for i9-12900K.

Intel’s i9 processor lineup has another variant, which is the 11900F. Now, this is a locked Intel SKU that doesn’t come with the Intel IGP. So, is it viable to spend money on this Intel CPU?  Let’s take a look at the features and offerings of this processor.

If you are going for an i9 processor from Intel, it is natural that you’d want to go with a high-end GPU for your build. In short, you’d want to handle the graphics and rendering with a separate processing unit.

And you are getting almost all the features the Intel i9 processor lineup has to offer. So, given the feature set. You may want to consider it as a potential option. Also, read our review on the best RAM for i7-12700K.

The Intel Core i7-11700K can be your best friend when it comes to gaming. As a matter of fact, the Core i7 lineup from Intel has always been one of the top options for e-sports and casual gaming. So, let’s take a look at the feature set. 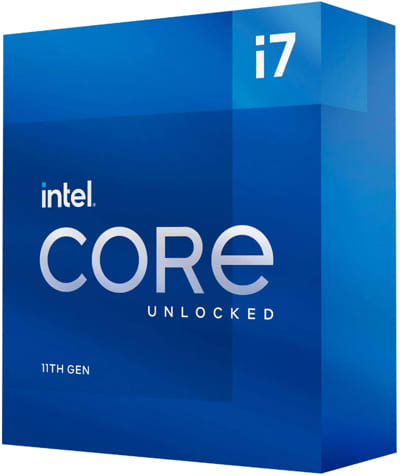 Modern AAA e-sports titles all benefit from higher clock speeds. And the i7-11700K, with its 4.9-5.0 GHz clock speed will offer better framerates in games (if paired with a decent graphics card of course!). And you can use it for productive tasks like video and photo editing.

All in all, for e-sports and other AAA titles, this processor will offer more than decent performance. As always, you may want to pair it with a decent Z490 or Z590 motherboard to get the best performance.

Do check it out if gaming is a priority.  Also, check out our review on the best RAM for intel 12th gen CPUs.

For those of you who do not want to mess with overclocking, but want a fast gaming rig, then the i7-11700 can be a decent choice for you. So, is it a worthy gaming processor from Intel? Let’s see. 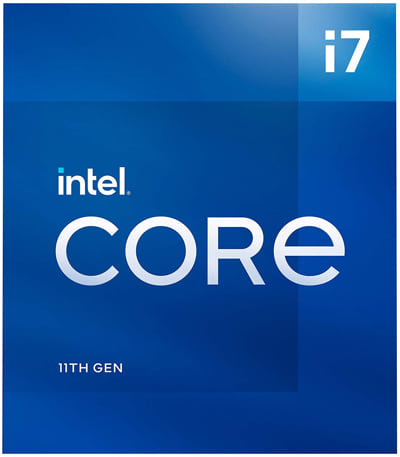 Highlighted Features of the Intel Core i7-11700

For a 65-watt CPU package, it offers proper playable frequencies. As mentioned earlier, higher framerates favor higher frequencies.  And 4.9-GHz, even in 2021, is plenty for modern AAA games.

Overall, for someone looking to update their gaming rig, the 11700 can be a decent choice.

But that’s only true if you don’t want to deal with overclocking. All you want is decent gaming performance. Also, read our review on the best LGA 1700 CPUs.

The Intel 11700F mostly offers the same feature set as its predecessor the i7-11700K. You’ll only see variations in the clock speed and TDP.

Once you take a look at the features, the appeal of the 11700F should be clear. For the price, you are getting good CPU frequencies. And, as you are building a fairly high-end rig, we are assuming you’d want a decent GPU to go with it.

So, going with the 11700F will allow you to save a couple of bucks as a whole.

We will leave the final decision-making to you.

The i5-11600K is one of the best Intel Rocket Lake processors because of the perfect blend of performance and pricing. Not only are you getting decent CPU frequencies, but the 6-core package can handle productivity to some degree as well. 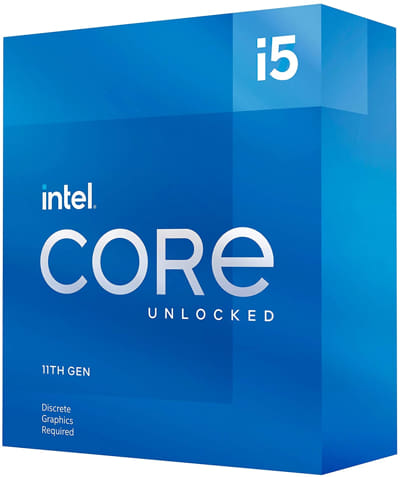 From the features, it should be clear that you are not missing out on much. 4.7+ GHz is plenty for modern AAA gaming titles. Also, you can get away with some light video editing tasks as well. Overall, the 11600K, from what we can deduce, should be a strong choice for the average user.

Also, it is an unlocked SKU. So, with the latest Z590 gaming motherboards, clearly, you will get decent framerates. Furthermore, it would cut down minutes during productivity tasks as well.

Now, it is up to you to make the final decision.

The 11600KF is an interesting processor in the lineup for the best 11th Gen CPUs. Although it doesn’t come with an integrated GPU, you will be able to push the clock speeds of this processor further.

Well, from the feature set, clearly you can see the viability of the processor. You can overclock it and get better frequencies. And as you are seeking this processor, it is only logical that you’ll spend the extra cash on a better Graphics card.

And that makes a whole lot of sense for gaming and productivity. In short, you’ll have a balanced system.

The 11400 is more of a ‘Serves All’ type of SKU. This i5-processor should be the perfect choice for a budget user who is looking for value rather than performance. 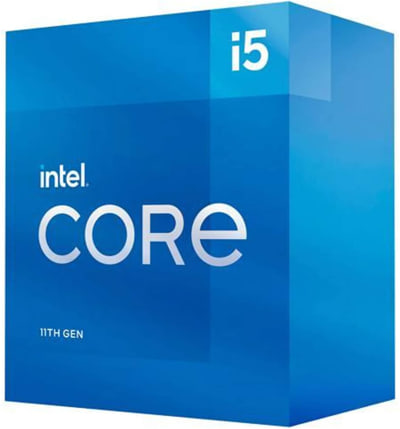 Highlighted Features of the Intel Core i5-11400

As you can see, this processor checks all the boxes when it comes to casual gaming and some light photo editing. It’s got support for faster memory. Also, the integrated graphics should get you started with your tasks.

All in all, for the price, it’s s sweet piece of tech for casual gamers and light users. If you want to get a taste of the 11th gen intel platform, then the 11400 offers a good starting point.

Throughout this review of the best Intel 11th Gen CPU, one thing is clear. Intel still holds the record for high and stable clock speeds.

But that was not the whole point of this review. As a matter of fact, we wanted to give you a thorough idea of what you can expect from Intel’s offerings.

And we’ve put forth our best effort. We’ll leave the final decision-making part to you.