Do you want the best LGA 1700 CPU for your new gaming PC? Then this article is specifically made for you.

I’m lucky to have my hand on all of the LGA 1700 socket CPUs. And from this journey, I have come up with all the performance ups and downs of these Intel processors. 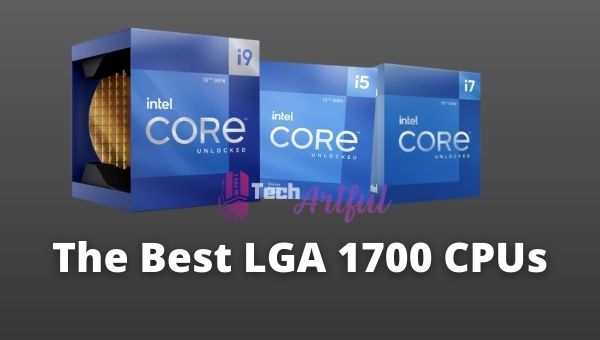 Here, I will share my experience of testing these CPUs along with graphs to make it easier for you to choose from.

A friendly disclaimer before I start with the results:

Not all of these CPUs are made for every profession. So, by reading the full article you will get to the best-suited one for your needs.

So, let’s dive right into the basic specs of the most popular LGA 1700.

The LGA 1700 socket CPUs are different from all the previous generation Intel processors. These CPUs come with two different types of cores: E-Cores(Efficient Cores) and P-Cores(Performance Cores).

Combination of thee cores helps in such multitasking performance that you have thought of never before. Besides that, the Intel 12th gen processors also come with some extraordinary new features which had blown my mind.

Here are the New features of intel 12th Gen CPUs:

While testing these CPUs I have played several games and ran benchmarking apps to find out the performance difference between these CPUs and the latest AMD processor Ryzen 5950x and the previous-gen intel i9 11900K. And it let me make an awesome graphical representation of the average performance score.

Note that, I was using an RTX 3080 Founders edition and using a single 1440p monitor setup.

If you want to go with the previous generation CPUs then check out the best LGA1 200 CPUs.

So, these are the Cinebench results(Single Threaded) that I’ve found by testing the processors: 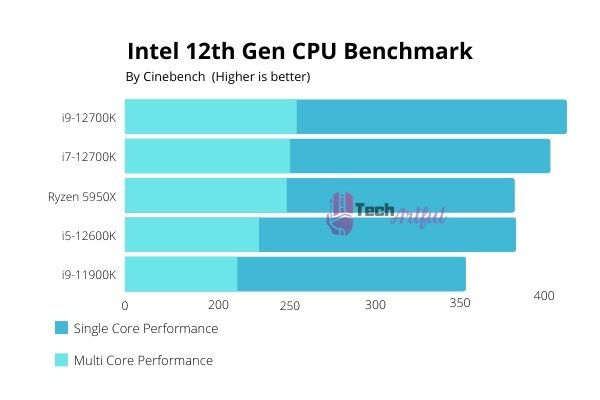 I think you’re already impressed by the performance of intel LGA1700 CPUs. But remember, I told you before that not all CPUs are made for the same purpose. So, it’s time for you to choose the best-suited CPU by going through the review.

Now, I’ll describe my personal opinion about each CPU and tell which one is the best for which purpose. Read carefully till the end if you don’t want to miss the price to performance ratio talks at the end of this article.

Here are the best LGA 1700 CPUs with their reviews:

The i9-12900K is the highest Spec processor intel has offered so far. This processor is insanely fast for its 30MB cache. I was getting a boost in the game loading and video editing speed instantly after installing this CPU in my new rig.

This processor is also power-efficient as its TDP is only 125W. Combining this processor with the latest DDR5 ram made my gaming PC a juggernaut. 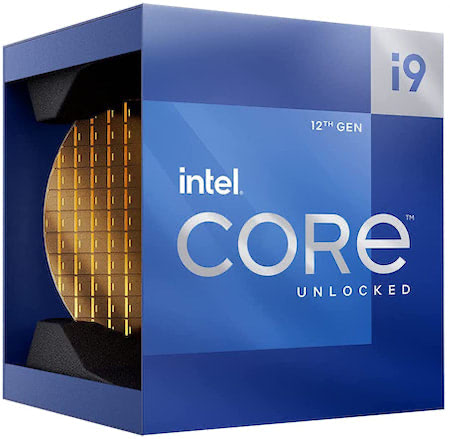 I don’t think, I would think twice about choosing this processor in my first place if budget isn’t a big deal. But if it is for you then you might consider the next CPU in our list.

Because doesn’t come with an integrated graphics chip and it’s a blessing for those who already have or will get a Powerful dedicated graphics card.

You’ll be saving some bucks for this reason and this will help you in utilizing saved money on spending it for either upgrading your gears or your system.

And the best thing is, All of the remaining specs of this processor are similar to the 12900K CPU. That’s why this is my favorite processor in terms of gaming. 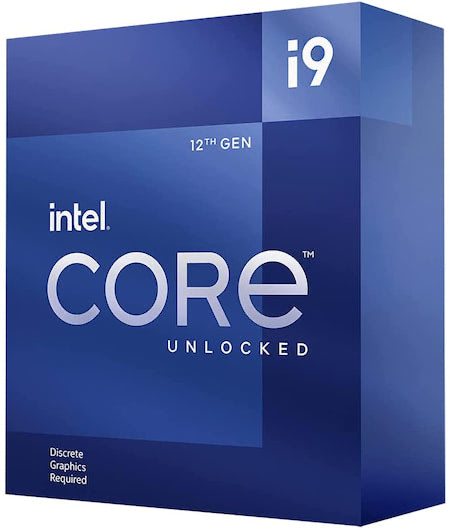 We all love the name i7 as we grew up hearing it’s the most stable CPU option to choose for every type of task. And the 12700K is no exception to that. The 12700K is the best overclockable Intel 12th gen CPU. You can Overclock this processor to such an extent that you won’t find any difference between this CPU and the higher-end i9 processors.

It’s hard to believe yet the fact that, i7-12700k is the best performing CPU out there when it’s highly overclocked. 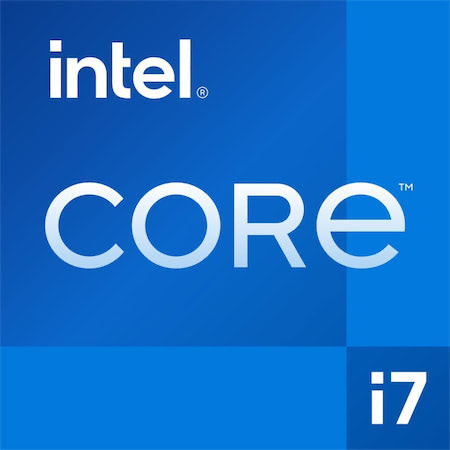 You also get the latest intel UHD770 integrated GPU with this processor. So, light gaming/video editing won’t be a very big deal without using any external GPU.

The most amazing part is, this processor has a higher base clock than that of the i9 ones.

I think this CPU offers more than a Pc enthusiast’s expectations. And so, I’ll highly recommend this LGA1700 CPU for any tech geek who is ready to overclock. Also, read our review on the best RAM for i7-12700K.

We all know that streamers use expensive Graphics cards. And if you are going to build a new PC built for online streaming then the i17-12700KF will help you by cutting down some costs as it doesn’t come with the integrated GPU.

Pairing this F-type processor with a powerful GPU will be a much wiser choice than having a single CPU without a dedicated GPU.

If you are a Streamer, you’ll experience zero lag if they are using an awesome setup with this 12700KF processor.

You ask me for a performance king under a tight budget, I give you only one option, the 12600K. This processor is so far my calculated best budget intel 12th gen CPU. You can do any stuff from gaming, video editing up to mining with this inexpensive CPU. Well, I’m not a mining geek and I’m still growing. But I’ve found that the 12600k is highly overclockable and performs quite efficiently with my mining rig.

So, if you want a mining setup you can invest your valuable money in the GPUs and get this beast processor at a reasonable price.

And if you are a casual PC user then you obviously don’t need any more CPU power than this, which I can guaranty you. So, I suggest my Netflix and chill buddies to build their PCs with the latest 12600k. 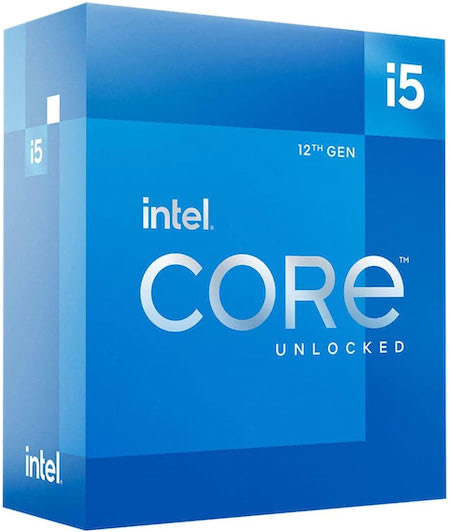 Also, check out our review on the best RAM for intel 12th gen CPUs.

Well, you might be thinking of graphs and charts and lots of data in this section. But I didn’t want to make it complicated for you.

So, I’ve made this list for specific types of users with my recommended CPUs so that you don’t need to think about your ROI(return on investment)

You can easily understand which CPU will give you the best performance from you spent money by going through the following table:

If you have followed this data then you’ll undoubtedly get the most value from your new PC built.

All the LGA 1700 CPUs come with a 3-year warranty which is pretty great. Most people usually change their PC within this long period, so intel got you covered till then.

The overclockable LGA 1700 CPUs are supported on the Z690 motherboards from any manufacturers. And you can pair them with either DDR4 or the faster DDR5 memory sticks.

Do note that, these processors do not come with a stock CPU cooler. So, you should consider getting a decent CPU cooler for cooling these CPUs.

Do check if the CPUs come with the LGA 1700 mount or extension mount. Otherwise, you won’t be able to turn on your PC without a cooler on it which is pretty normal.

LGA 1700 CPUs are amazing in terms of performance. But you must choose the best CPU for your PC as you won’t be changing it frequently. I’ve tried my best to show you the benchmark results as well as share my honest analysis of these CPUs.

All of these processors are capable of running your favorite modern AAA games and doing all other multitasking stuff. But you know the best, what type of performance you’ll be needing. So, I wish you the best in choosing the most suitable intel CPU for your PC.