If you are looking for the best B550 motherboard for your Ryzen build PC, then you have come to the right place.

In this post, I will be sharing my experience and review of the top 7 best b550 motherboards that I have tested with my Ryzen 7 3800 XT built gaming PC. 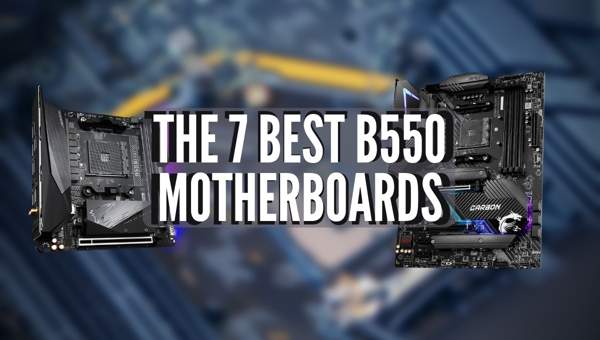 If you don’t have much time then you can directly check out Our Recommended B550 Motherboard.

Otherwise grab some popcorn and take a tour of what I found promising and displeasing among these hugely popular B500 AM4 socket motherboards.

If you don’t want to dive into the in-depth review then here’s a glance of my top 3 picks. From here you can know which motherboard will be the most suitable one for you:

Again if you are a Intel fan then you can check out our separate review on the best LGA1200 processors.

Best 550 Motherboards with their Reviews

Before going furthermore, let me tell you that most of these b550 motherboards have some standard features like 2.5GbE LAN support, PCI 4.0, USB 3.2 type-C, pre-installed I/O shield and impressive RGB connections and capabilities.

So, I will highlight only those features that I have found extraordinary in each of these motherboards as well as my personal experience using them.

Yes, each motherboard has a unique feature to stand out from others. And you will see them at the end of every b550 motherboard review.

So here are the top 7 best 550 Motherboards with their Reviews:

Let me tell you why this is the number 1 B550 motherboard:

This Is the only B550 motherboard that comes with both Fins-Array Heatsink and Thermal Backplate. The backplate also helps the motherboard to be more rigid. I have tried several times and couldn’t bend this motherboard a little bit.

You will also get 3 PCIe 4.0 M.2 slots having excellent quality thermal guards!

The armour of the PCIe 4.0 slot for the first GPU has an extraordinary metal guard.

The best thing is:

You can overclock your RAM with XMP upto 5.4GHz.

And you also don’t need to worry about cooling as this board comes with a total of 9 thermal sensors, 7 fan connectors and one water cooling pump connector.

The one thing important feature of this mobo offers and you won’t get in other motherboards is:

There’s a Q-Flash Plus button to update BIOS only by powering the motherboard.

If you want your PC to be super durable and extreme performing, then the b550 aorus master is the way to go.

Extraordinary features of B550 AORUS MASTER:

If YouTube is your best buddy then be sure to check out our recommendations on the best online youtube downloaders. 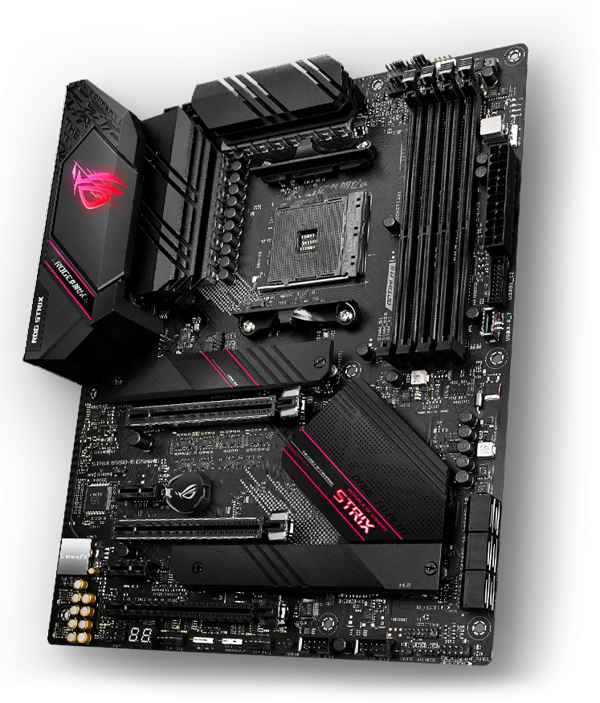 If you are an Asus fanboy like me, then this is the best that ASUS offers for B550 series motherboards. Though I am personally using this motherboard right now, I will be unbiased to say it’s positives and flaws.

This motherboard has only two M.2 slots(one is a PCIe4.0), but it’s sufficient for most users like me.

I love this board because:

It’s USB Type-C is combined with the 3. 5mm adapter cable and Thunderbolt 3 header which reduces a lot of hassle. And the AI noise cancellation helps me a lot from gaming and streaming. I don’t know why other manufacturers don’t include this feature.

I have great affection for RGB, and I think the combination of iCUE and Aura sync is the best in this regard. And these are the reasons that kept me stuck with this motherboard.

Incase you are a game streamer then dicsord screenshare is a big part of your life. And I highly recommend you to check troubleshooting for discord screenshare no audio issues. 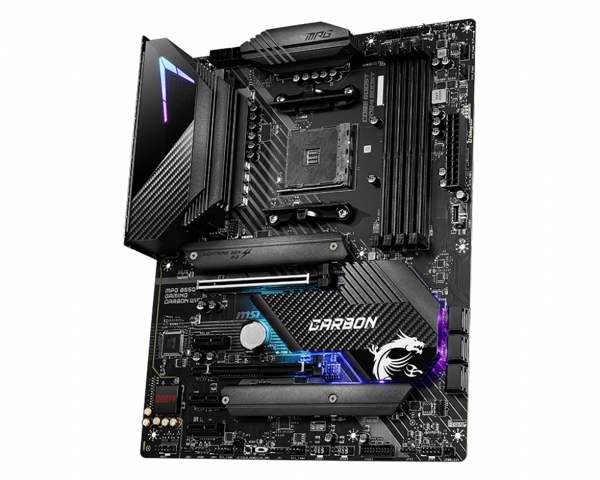 I found MSI MPG B550 Gaming Carbon WIFI motherboard to be the best in terms of overclocking. From BIOS to MSI Afterburner, MSI is just awesome in terms of software simplicity.

Their BIOS is user-friendly and I can navigate to any part of the BIOS much quickly.This motherboard also has Aluminium cover to it for making it lighter yet better in terms of heat releasing.

This motherboard also has a durable PCIe steel armour in the graphics card slot.

The XMP profiles are more versatile too. IF you are more into overclocking, the MSI MPG B550 Gaming Carbon WIFI will be the best option for you.

Fact: Gaming monitors are awesome too but they aren’t worthy unless you overclock your monitor to 144Hz atleast. 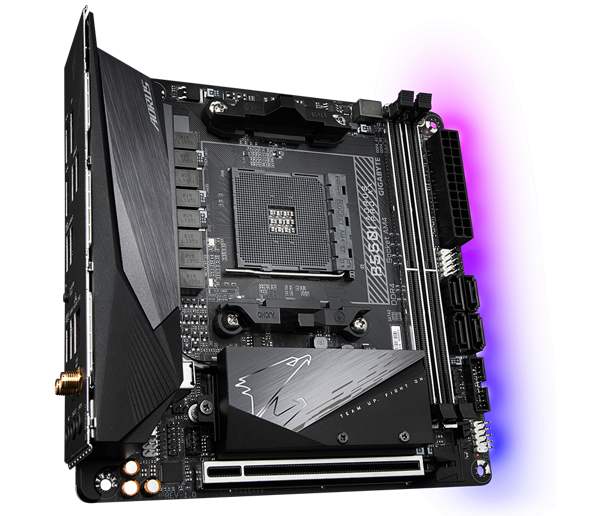 If you want to build a small PC, then you will need an ITX motherboard.

Why am I saying so?

Though this motherboard comes with a lot of features that the aorus master has(the number 1 mobo). Its form factor is small and it’s suitable for those people who won’t use dual graphics cards.

Though it’s tiny, it didn’t sacrifice dual M.2 slots with thermal guards, backplate and the Q-Flash Plus button.
Now, let’s talk about the things you won’t get from this mobo.

As the B550I AORUS PRO AX is an itx motherboard, it only comes with 2 RAM slots. And one PCIe4.0 graphics card slot.

But the best thing is:

These slots are shielded around metal guards.So, you can say, It’s a tiny beast motherboard. 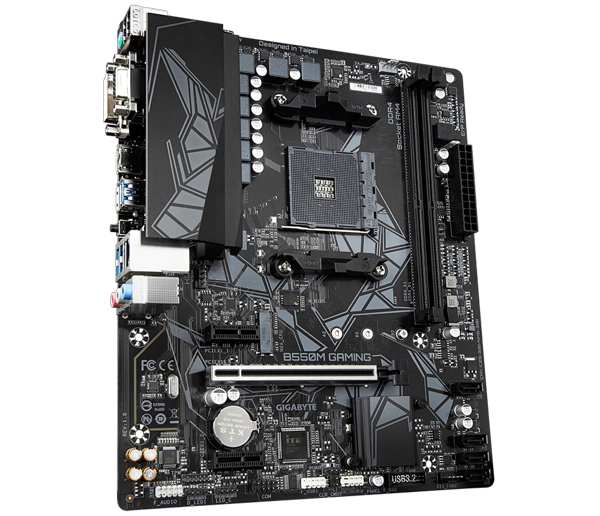 This is a micro ATX motherboard. And I kept this motherboard for only one reason. And that is its low price.
You are getting all the excellent feature of other gaming motherboards in it under a meagre cost.

Yes, I agree that it doesn’t come with any fancy RGB lighting on the heat sinks, but you can get enough RGB from the other components as this motherboard is RGB fusion 2.0 compatible.

If you face any errors while using gigabyte’s RGB app then check out how to fix RGB fusion 2.0 easily by tweaking a few computer settings.

And the best thing is:

Though it’s a budget B550 motherboard, it doesn’t sacrifice the PCIe armour, Q-flash and USB 3.2.

Let’s get to know what you will be missing for this mobo. Cons of this motherboard are: 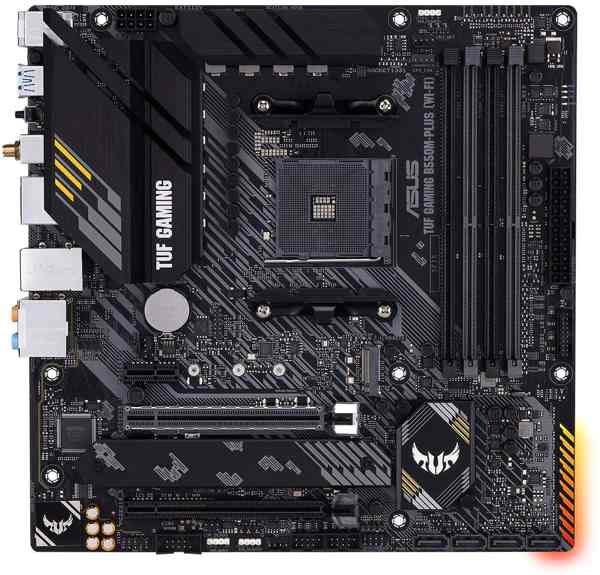 If you love TUF, then ASUS didn’t displease you because they have a TUF version for B550 too.

This motherboard is interesting.

I am saying that because:

I have never used a motherboard like this which is microATX but still has features like an ATX motherboard. Yes, you are guessing it right.

This board has 4 RAM slots and two slots for GPU.

And holy moly! The TUF Gaming B550M-PLUS has a BIOS reset button and Noise Cancelling technology.

The cringiest part is:

This board has a PS/2 port too. I don’t know why that even exists. People even forgot PS/2 is a port for keyboard and mouse lol.

I can undoubtedly say that:
ASUS TUF Gaming B550M-PLUS is the best micro atx motherboard on planet Earth. 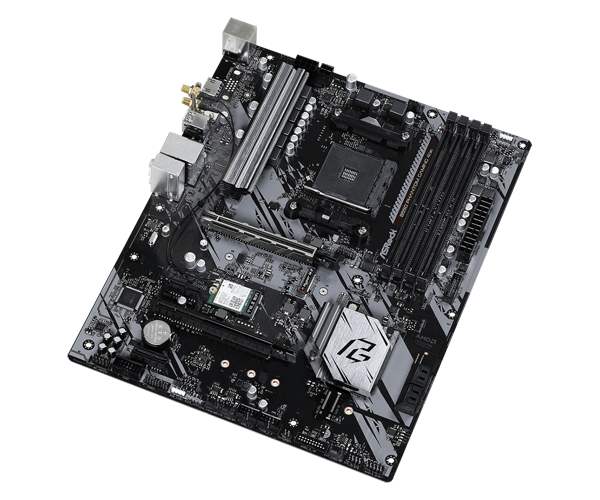 This is my last choice for the B550 motherboards. This motherboard is especially for those people who don’t care about aesthetics and are more into basic tasks and gaming.

The best part of this mobo is its price. It’s very inexpensive, and you can save or spend the money on other components for more performance.

To be honest, I found that:

The RGB software, i.e. polychrome sync, is pretty unusable and trashy right now(might get better in future). I couldn’t sync anything properly because of that app.

And the wifi connector is attached with a wire which looks pretty odd. But, I am still recommending this motherboard as you can save a good amount of money and spend that for your Graphics card or RAM.

The only feature of ASRock B550 Phantom Gaming 4 AC that grabbed my attention is its affordable price. B550 is a capable chipest, and it’s great for the Ryzen 3000 and 3000XT series. So, you won’t be having any performance issue with this mobo.

Now that you have gathered all the vital info about the b500 motherboards for AMD processors, you can easily choose the one that will suit your system the best.

I honestly think that though some motherboards in this list are quite expensive and have tons of features, you won’t be using all of those as usual. So, it’s better to spend more on other components like GPU and ram rather than your motherboard.

If I had to choose one, for a budget build then I would choose the gigabyte b550 gaming motherboard as its features are more than enough. For any type of opinion and inquiry, feel free to tell me in the comment section below.