The term ARGB may seem alien to some folks out there. Although it’s been around for quite some time now, it’s better we start off by explaining what it is.

Simply put, ARGB means Addressable RGB. In short, the individual strips of the led are capable of producing independent colors. In contrast to regular RGB, they offer a lot more versatility. 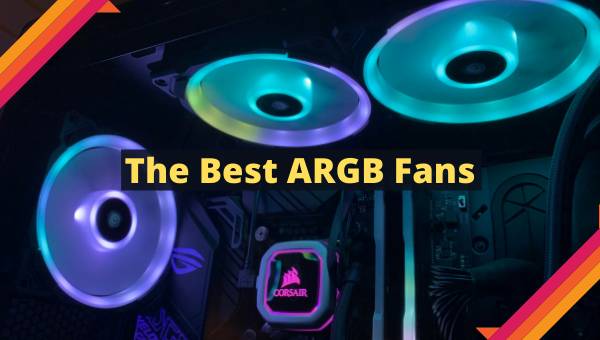 Now that you know what ARGB is, you may want to know why you would need the best of them?

Well, the main reason for it is aesthetics. Whether you are using a static air pressure fan or a regular pc case fan, addressable RGB lighting adds flair to the system.

For this reason, in 2021, the best pc fans for gaming feature ARGB as an inevitable feature.

If you want to make it quick, check out Our Recommended ARGB Fan.

We have some of the best case fans with addressable RGB for you today. All of the options offer more than decent performance for the money.

So, without any further ado, let’s get started.

ARGB Fans are gorgeous. But this isn’t enough to rank them. So, we  tested these fans extensively and gathered all the required info you need before purchasing one. We have considered Fans Speed, airflow, static pressure, Software support and the overall aesthetics for ranking this fans from 1-7.

Here are the best ARGB Fans:

Thermaltake, as many of you know by now, is one of the well-known computer peripheral makers on the market. And when it comes to the best RGB static pressure fans, the Riing fans come out on top. 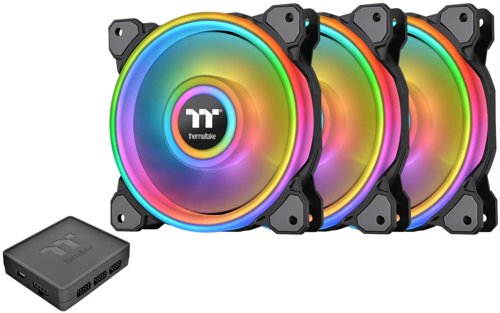 First of all, let’s start with the ARGB aspect.

The lighting is hands down, the best we have seen so far. And the light rings add more to the entirety of these case pans. Overall, you will not have any complaints with your RGB rig lighting.

The other features contribute to it as well. You have great support for 3rd party software. And the air moving capacity is decent as well. Furthermore, the custom animation feature is like icing on the cake.

Although there is adequate support for Thermaltake fan software control, it is not very intuitive. But, once you daisy-chain all the features together, you get excellent support. Overall, it’s an excellent package.

Corsair is one of the leading brands in the PC market. Thanks to their industry leading peripheral design capabilities, they have some of the best RGB fan options out there.

For this very reason, we have the Corsair LL 120mm fans in our line up. Let’s get to know them more. 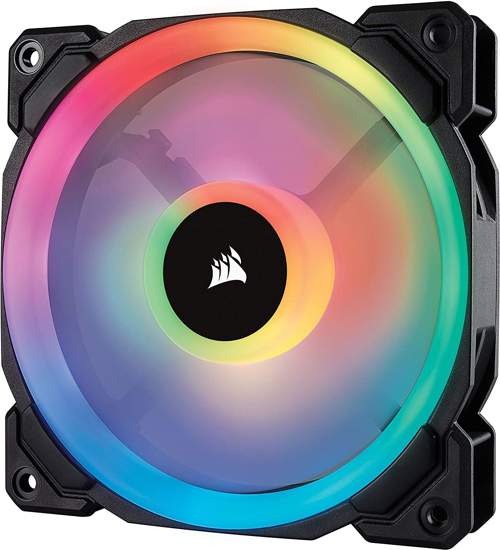 The LL series fans from Corsair aren’t just famous for their performance. As a matter of fact, the fully addressable RGB performance is also one of the key factors for being a top choice.

And the iCUE software support is something that sets these fans apart from the competition. But the other features play a key role as well.

The only problem you may find is the need for an ARGB control hub. In order to avoid the issue, you may want to go with a pack of 3. This way, you are getting a better overall experience.

Despite the small hiccup, the Corsair LL series fans are some of the best looking ARGB fans you will find out there. Do check it out.

Although SilverStone is famous for its power supply units, their Air Blazer ARGB fans offer the right balance between performance and value. So, let’s see what they have to offer. 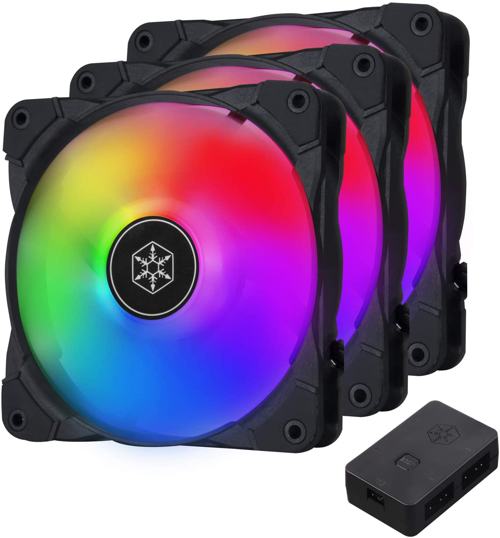 These hydro-bearing fans come with proper ARGB lighting to make your gaming rig stand out. The subtle, yet punchy lighting looks excellent in any case. And these fans have fair software support.

Speaking of the performance as a whole, there’s not too much to complain about here. The noise levels are fine. And the air removal performance is on point as well. The SilverStone Air Blazer is also a gigabyte RGB fusion compatible fan.

Except for the speed controls, you have control over all the necessary features. Also, the pricing is fair given the feature set.

When it comes to InWin, then the first thing that comes to mind is a PC case. Gamers prefer InWin casing over other choices because of their designs. But the Sirius Loop 120mm fan kit is a decent offering from InWin because of the distinct design and ARGB performance.

As you can see, the dual-loop lighting is the feature that distinguishes it from the competition. Also, thanks to the padding, the high RPMs don’t cause any vibrations.

As a whole, the lighting performance is more than acceptable.

You may need to deal with a fair bit of cable management because of the daisy cabling of these fans. Other than that, for the value, the deal is too good to miss.

Cooler Master gaming peripherals are popular amongst gamers for their reliability. The same is true for these MF120 Duo-Ring ARGB fans. 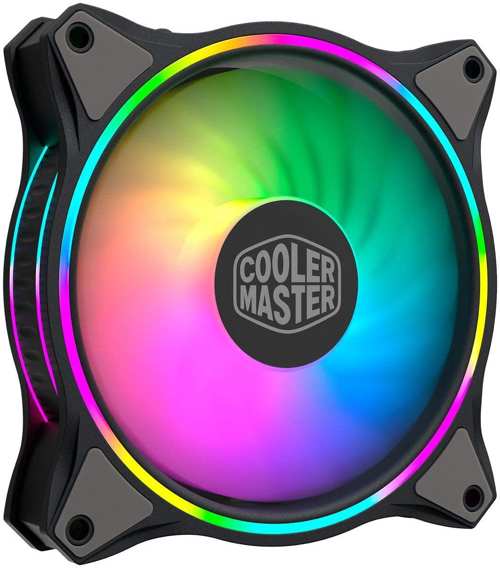 You will fall in love with the lighting. There’s no doubt about it. As a matter of fact, for the price, it is hard to find fan kits that are so ‘Worth It’.

And the performance is decent as well. PC temperatures remain optimal. So, you will get decent performance as a whole.

If you are looking for the best RGB fans for mystic light, then these may be the perfect choice for you. Other than the ‘Higher than Usual’ noise levels, you have a decent set of fans.

And they will offer proper illumination.

You already know why the SP120 RGB PRO fans are in the list. So, rather than ranting about, let’s talk about the features and the lighting performance. 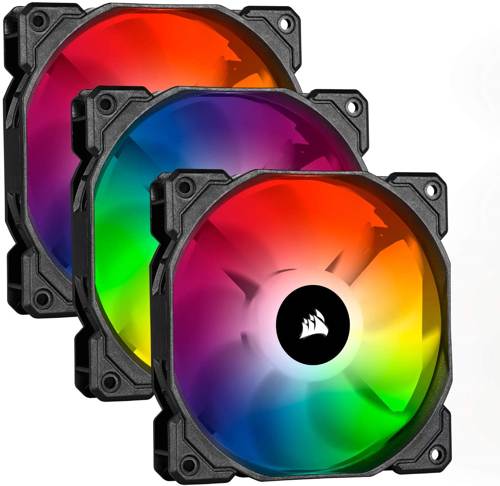 Although the performance is well beyond some of the high-end options, the iCUE software support sets it apart. As a matter of fact, the intuitiveness of the software allows the user to come up with various innovative lighting ideas.

So, should you go for it?

The only complaint we have is the missing vibration pads. Other than that, they are some of the best corsair RGB fans you can get.

Last but not the least, we have the SF120P from Cooler Master. Here’s how it performs and see whether it deserves to stay in this review for the best addressable RGB fans. 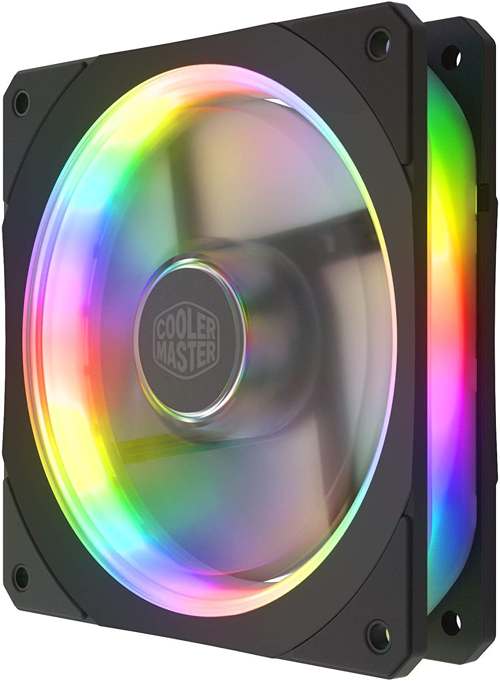 The ARGB performance is fair considering the price. It will complement the whole gaming system no doubt. Also, the overall air removal performance is decent as well.

There’s some whine to the fans because of the rifle-type bearings. Other than that, the package, as a whole makes a lot of sense.

For this reason, you may want to take a look at them.

Although today’s discussion was more about the best ARGB fans, we believe you have some potential options for the best RGB intake fans. To add to that, we can promise you something:

Whichever option you choose to go with, you will not be disappointed.

But before we leave, many of you may be wondering about static pressure fans. Are they even worth it? Will they offer decent value for the price?

In fact, static pressure case fans have the right design to tackle flow resistance, which is something you need for optimal pc performance.

Still, without RGB, there’s no real flair to your rig. So, choose wisely to make your system look gorgeous.