Suppose you are working relentlessly from home, but Microsoft Teams status showed that you were offline during office hours, leading your colleagues to be confused. How frustrating would that be? 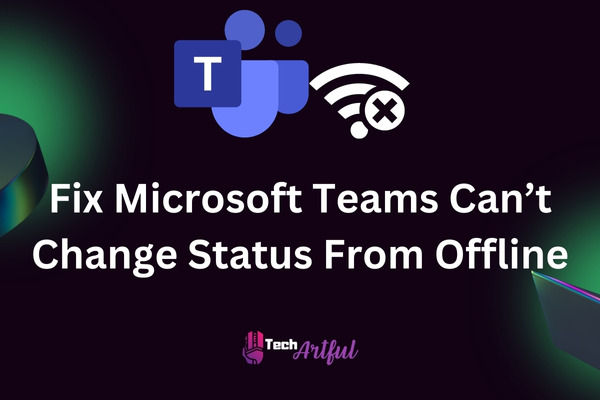 Microsoft Teams is one of the most popular video conferencing and communication platforms available on the internet at the present time. It is being used by a lot of institutions and companies so that people may collaborate with their friends or colleagues online. You can see who is online and available for work, as well as who is not online at this time.

Regrettably, many users have complained that the status of their Microsoft Teams account is wrong and cannot be modified. It remains stuck in the offline or out-of-office state even when I am connected to the internet. The other members of the Team are confused since the status indicates that we are not available even while we are.

Don’t worry if you are also one of them who are suffering from this problem. Because here, we will show you how to fix Microsoft Teams that can’t change status from offline.

There are many problems, each of which causes the Microsoft Teams app to switch the status to offline. Multiple active sessions, background programs that are in conflict with one another, incorrect calendar entries, and excessive cache files are a few examples of these problems. Because of these issues, the MS Teams have no choice except to change your status to offline.

Below we have discussed some of the most possible reasons behind this problem:

If you are now signed in to Microsoft Teams on any other platforms, but you aren’t using this for the job, the server for Microsoft Teams may identify that you are currently unavailable because of this.

Because of this, signing into MS Teams from more than one platform will lead you to run into the problem of Microsoft Teams being unable to update its status while it is offline.

VPN Is Turned On

If you connect to Microsoft Teams over a virtual private network (VPN), you may have an issue that causes you to seem to be offline.

MS Teams need a connection on a real-time basis with the remote server in order to function properly. Using a virtual private network (VPN) may cause this connection to be slower and will disrupt the real-time data exchange that Microsoft Teams has with its distant server.

Because of this, making use of a virtual private network (VPN) results in the Microsoft Teams being unable to switch its status from offline.

Let’s say you have a weekend or an appointment outside of the workplace marked on the calendar in your Outlook account, and it suggests that you will be absent from the office. In that situation, Microsoft Teams will start picking up that input and combine it with the status for that particular day.

As a direct consequence of this, you will be shown as offline for the whole of the day in MS Teams.

In the event that the Microsoft Teams app has issues while starting up, it is possible that some functions may not operate as expected. One of these functions and services includes indicating the state of the user. MS Teams makes use of such a sophisticated algorithm to determine the status and then updates that on your profile in accordance with that determination.

If this happens, you will experience problems such as Microsoft Teams being unable to change its status from offline.

When you launch the same application several times on the same computer without closing it down, a large number of cached files are created. These cache files might cause conflicts with one another and disrupt the activities that are working in the backend of the application.

The procedure for updating the status in MS Teams is one of these procedures that could be used. If you do this, you’ll run into problems with the issue where MS Teams won’t let you update your status after it has been offline.

Any app that hasn’t been updated in a while won’t have the most recent optimizations and capabilities that the developers have to offer, and it may have trouble connecting to the servers that have been designed specifically for the most recent version of the software.

It’s possible that the “Microsoft Teams can’t change status from offline” problem you’re seeing is due to the fact that you’ve been using an application that hasn’t been updated in quite some time.

If you are now struggling with the status problem that affects Microsoft Teams, there are a few different solutions available to you that will correct the error in the status. If you want to turn off the “Out of Office” or “Offline” status, give each one of the solutions listed below a shot in order.

The Microsoft Teams app has a number of useful features, one of which is the ability to automatically update your status based on the activities you’ve been participating in. Its reputation is being damaged by difficulties such as Microsoft Teams being unable to switch the status from offline, despite the fact that its use as a platform for corporate communication is seeing explosive growth.

In this part of the guide, I will walk you through the steps necessary to resolve the bothersome problem of MS Teams not being able to change its status from offline, which will ultimately result in an improvement in both its availability and its efficiency.

The following is a list of solutions to the problem of Microsoft Teams can’t change status from offline:

1. Switch To The Web Version of Microsoft Teams

In the event that you are confronted with the glitch “MS Teams can’t change status from offline,” you may manually update it by accessing the online version of Microsoft Teams.

Follow the procedures below via the online version of MS Teams in order to manually modify the status of the team: 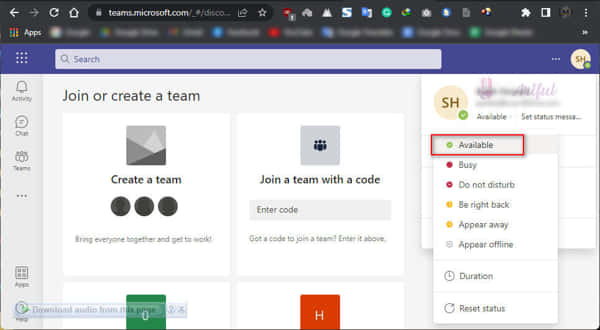 In this way, you will be able to easily fix the Microsoft Teams that can’t change status from offline.

Check to see whether your status has been changed from “Offline” to “Available” on the Microsoft Teams app.

Stop utilizing a virtual private network (VPN) since doing so can help you prevent inconvenient situations such as the Microsoft Team being unable to update its status after becoming down. If you want to prevent problems like this one, you should use a direct and strong internet connection instead of a proxy server or a virtual private network (VPN).

3. Eliminate Every Other Session

You will run into the problem of your status in Microsoft Teams not updating when you are from offline to online if you have signed in to the service on more than one device.

To resolve the issue where the status of MS Teams does not change after being offline, please follow the instructions below: 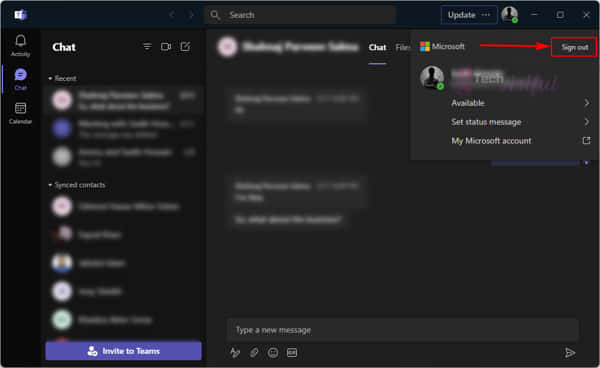 Once you are done completing all the steps above, it’s time to check whether or not your problem has been solved.

It is possible that the MS Teams app may assign your status to “offline” if your Outlook calendar has an incorrect event, such as a holiday or a trip. MS Teams monitors the actions of other products in the Microsoft 360 family to ensure that users have more positive experiences overall.

Because of this, the Microsoft Teams app will change your status to “appears offline” if you have an item on your Outlook calendar stating that you will be gone from the office at a certain time.

Therefore, you should verify the calendar in your Outlook application and remove any items that are not legitimate. After that, log in to the Microsoft Teams app once again, and observe whether or not the problem persists.

If you delete the cached files of the Microsoft Teams app, you may be able to force it to reboot its processes, which will bring your status in the app fully up to date.

Follow the instructions below on how to remove the cache files of the Microsoft application on your own computer: 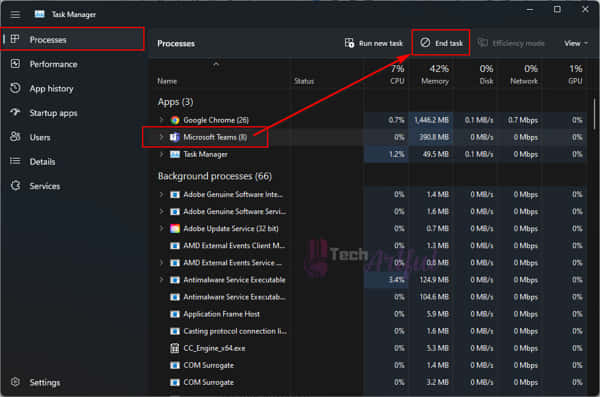 Once you are done, launch MS Teams once again and check to see whether the problem still persists.

Arrange an all-day meeting, and your status should return to “online,” as you must be connected to the internet to participate in the meeting. You should get the assistance of one of your other pals in order to make the appointment, and then after five minutes, you can exit the appointment and examine your status.

To organize a conference that will last the whole day, please follow the instructions below: 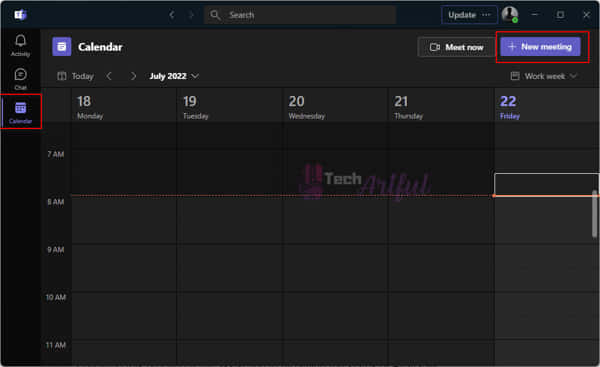 Following this procedure will assist you in regaining the status of Available in Microsoft Teams.

It’s possible that updating the Microsoft Teams application will fix the problem where you can’t update the status while you’re online. An app that has not been updated in a long time may continue to give you trouble with a variety of problems like this.

Consequently, updating the application will assist you in resolving any problems, including the inability to update the status of MS Teams while it is offline.

In most cases, the Microsoft Teams app will automatically update itself when an update is available. However, the following actions need to be followed in order to update it manually: 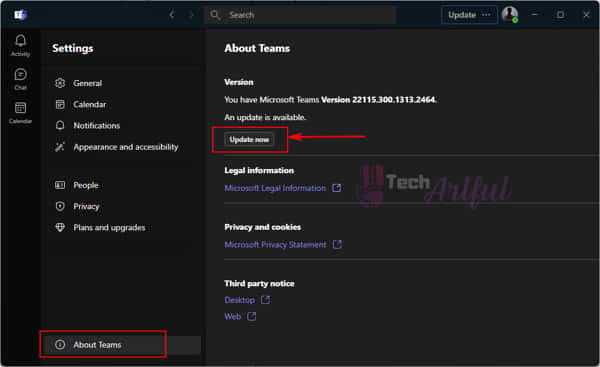 After that, MS Teams will check for updates and download and install them immediately if there are any available.

Not changing the status in MS Teams can be frustrating sometimes. So, after doing some intense research, we rounded up some of the best possible ways through which you can easily fix Microsoft Teams can’t change status from the offline problem. Hopefully, you found this article helpful and solved your problem.