Ever since the most recent version was released, many people have been facing some problems while sending a GIF. Whenever someone tries to post a GIF from their smartphone or computer, it just doesn’t work. The gif will go through, but it will not animate. It seems as if you uploaded a photo instead. 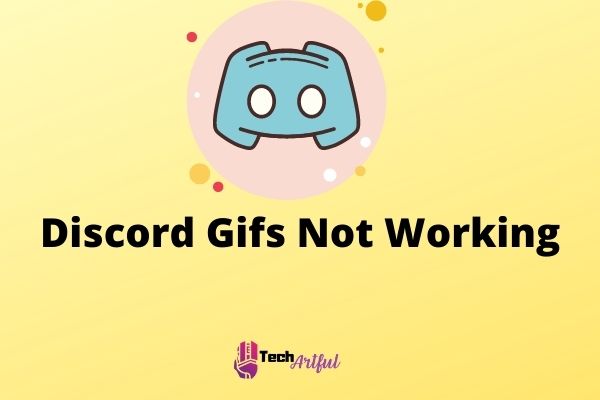 There might be a number of different reasons why Discord Gifs aren’t functioning or playing. A software glitch, an internet connection problem, or perhaps a device setting that is in conflict with the Discord might all be the culprit.

However, this is not a huge problem to be scared of. We gathered all the possible ways through which you can defeat this issue very easily. So, keep reading this post until the very end to know how you can solve the Discord Gifs not working problem.

Why GIFS Are Not Working on Discord?

Because of the recent update, sometimes, when you send a gif to someone, it won’t work. It will seem like you sent an image instead of a GIF. And there could be so many possible reasons why your GIFS are not working properly. For example, the cause can be a software glitch, low internet connection, or some settings that conflict with the discord setting.

Apart from that, Discord if the GIF size is greater than eight MB, then it can also cause the issue. However, below we gave some of the most common reasons that can trigger this problem. So, before getting on to the main solutions, we suggest you troubleshoot the below problems.

You may now think that why should you check the internet connection when you are already connected, and everything is working fine. But keep in mind that if you have a very poor internet connection, then it might prevent GIFs from being uploaded properly.

Because of the improper upload of a GIF file, it may get corrupted and won’t play anymore. So, it may seem to be insignificant, but before uploading a GIF, double-check that your internet connection is good enough.

There is a limit mentioned on the teams and conditions of the Discord. They restrict the size of gif files to less than 8MB in order to ensure seamless functionality and a lag-free experience. As a result, if your GIF file is larger than eight MB, the file will be rejected from being uploaded. 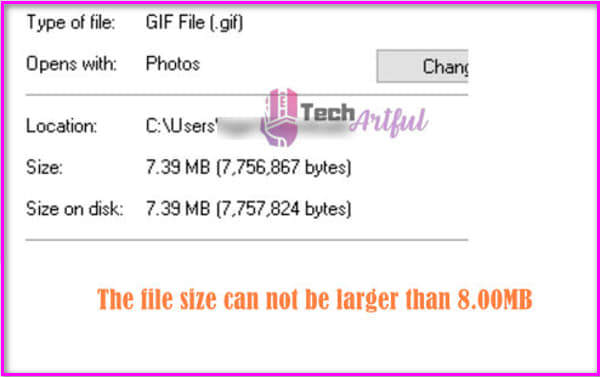 However, even if you somehow managed to send the GIF and successfully uploaded it, it will not play or display in the way that you expect it would be.

The file limit, on the other hand, will be larger for Discord users who have subscribed to their plan. And of course, the file size limit will vary depending on the subscription that you purchased.

Although the file extension of animated images is typically represented as gifs, they may also be found in WebP or other latest forms. Due to the fact that Discord does not currently allow WebP files, the file will not run or open in this situation.

Discord doesn’t allow free tier users to send gifs as an avatar. Because of this, ensure that you are at the very least subscribe to the Discord Classic plan before attempting to send someone a gif as an avatar.

How to Fix Discord Gifs Not Working

If you recently updated your Discord software and now you are unable to send Gifs to someone, then don’t worry. This problem has so many solutions that can solve it. In the following, we are going to show you some of the best ways through which you can solve the Discord Gifs Not Working problem.

Some of our methods are very technical and platform-dependent, so be sure to follow the methods carefully before proceeding.

However, there is one common solution that you can try before moving on to troubleshooting. If you are an iOS or iPadOS owner, you may switch off the “Reduce motion” option in the iOS settings to resolve the problem of Discord gifs not working. For PC and Android users, switching on the “Automatically play gifs when possible” option may resolve the problem.

So, here are the steps to fix Discord Gifs not working:

1. Uninstall and Reinstall the Discord

Sometimes when you use software for a long time being, it stores a lot of temporary files and caches. And deleting those files can be such a drag. So, if you don’t want to go through all the troubles of deleting those caches and files manually, you can try reinstalling the software. 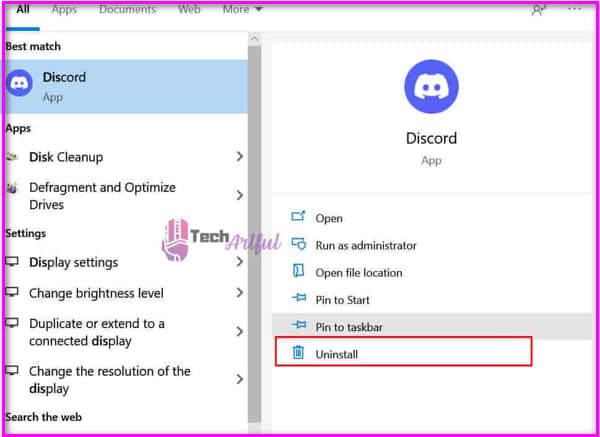 For the majority of the time, a simple reinstall of the program is able to resolve the problem. So, in order to reinstall Discord, it should be uninstalled first. To uninstall it, follow the below steps.

Now that DIscord has successfully uninstalled, it’s time to reinstall it. Go to the official website of Discord (https://discord.com/download) and download the Discord Desktop Client, and then install it as usual.

As for the Android and IOS users, you may reinstall it by going to the App Store or Google Play Store.

There are some occasional situations when your account and the Discord server do not synchronize correctly, which results in GIFs not working or uploading incorrectly and causing the problem. However, this issue can easily be resolved by just re-logging in. So, to complete the process of logging out, follow the below steps.

Now, once you have signed out, simply just put your discord credentials to sign in back.

3. Switch Off the Reduce Motion Option

Reduce Motion feature decreases the amount and intensity of animations, hover effects, and other moving effects across the Discord. Sometimes reducing the motion can cause this problem for iOS and iPad users. So, it is possible to resolve the problem if you are an iOS or iPadOS owner by switching off the ‘reduce motion’ in the Discord settings. 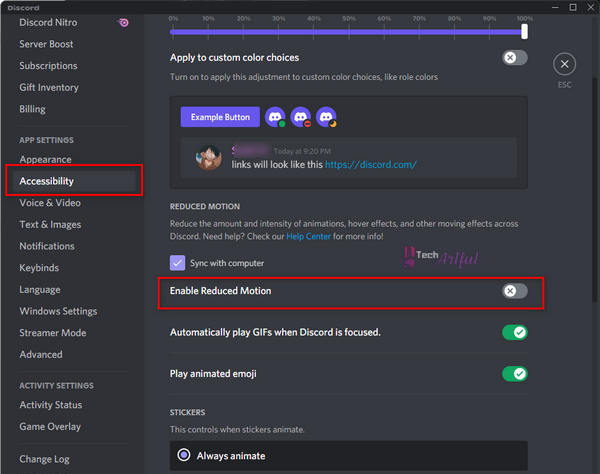 Discord complies with this option and immediately pauses the playback of gifs. As a result, shutting it off will resolve the problem if you are using Apple devices.

But if you don’t want to switch Reduce Motion off for all of your devices, then there is a very easy way to do that. Just go to the Accessibility option by following the steps that we have shown above, and overhead the “Enable Reduce Motion,” you will see the “Sync with computer” option. Just untick it, and you are done.

There are some configurations in the Accessibility option that you need to do to solve the problem. And the main reason behind this configuration is to let discord play GIFS automatically.

It is possible that the auto-play feature will be switched off by default, particularly after an update that has been performed. As a result, you will have to manually re-enable the option.

If you want to do this, follow the below steps: 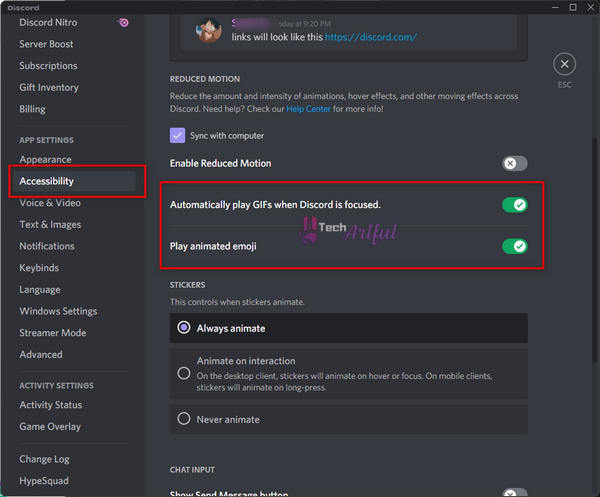 Also, turn on the Always animate option under the STICKERS section. It will enable Discord to instantly play gifs without the need for a click, hover, or touch.

Once in a while, a new problem arises with the Discord gifs, particularly soon after an update. In such a situation, rather than posting gifs from the gallery or hard disk, you should utilize gif apps instead.

Discord is excellent at integrating with a wide range of other applications. There are so many GIF apps available out there, but one of the most increasingly popular and the most user-friendly of them is the GIFY. Not to mention, there are plenty more available. So, if you have not tried it yet, we urge that you do so in order to simplify the procedure a little bit more.

The possibility of your gifs not working on Discord will be much lowered if you use an app like this. Also, you will get access to an almost limitless supply of animated gifs and animations. You will also be able to store all of your favorite GIFs for later use, which is a huge convenience.

In the event that there are still unresolved problems available in Discord, using a GIF app is a wonderful immediate solution that you can consider.

6. Try Uploading GIFs As A File

Sometimes when you send someone GIFs from your Camera Roll, Discord thinks of it as a picture for some reason. That’s why the GIF won’t work. But if you send GIFs as a file, it may solve the issue. So, try submitting gifs as a file instead of from your camera roll.

7. Try Using the Discord Web Client As An Alternative

Using a web browser is the best option when you are attempting to send gifs from a mobile application. There have been several reports of users who are reporting that utilizing the Discord web client has resolved the Discord Gifs Not Working problem. So, if you are having some issues with the GIFs, you can try using the web client.

We know that this is not the easiest method of sending animated gifs. Although it is possible that when everything else fails, this might be a reasonable solution.

Why are my gifs not moving?

It is possible that the Automatically play GIFs when Discord is focused, and the Always animate option is disabled. So, GIFs won’t move unless you turn them on.

How can I upload gifs to work on Discord?

You can upload GIFs by simply dragging them from another source and then dropping it into the Discord chat window.

Sending GIF features is an amazing thing to do with friends. But it’s not a pleasant thing when it gets stuck or not working. So, we gathered all the possible ways to fix the Discord Gifs Not Working issue. We hope that this post has helped you to solve your problem.