If you’re playing Diablo 2 Resurrected on a PC with a low-to-medium graphics card, this guide will show you how to set up the best graphics settings for the game.

This will improve the overall smoothness of your gaming experience, and a correct mix of settings may even allow you to eliminate some performance issues such as frame drops and stuttering from the game. 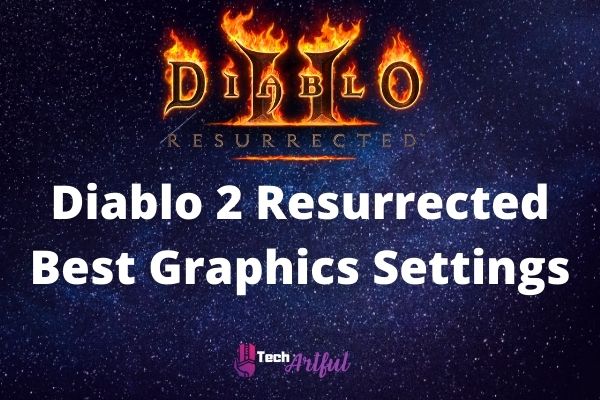 Diablo 2 has returned, and this time it is in the state of being ‘Resurrected.’ There are presently no known issues with the game’s performance on any central platform, including the Xbox One and PlayStation 4. Although it is a faithful recreation of the original game, released almost two decades ago, it is not a perfect replica.

Neither the plot nor the game’s core gameplay mechanics have been changed throughout the process of development. D2 Resurrected is a remake of the original Diablo 2 game. Rather than competing against one another, Blizzard and Vicarious Visions have collaborated on the game’s development this time around.

However, even though it is merely an updated version of an older game, the Diablo 2 edition published in 2021 features many changes. There has been a total makeover of the game’s visuals, and it now supports a 4K resolution. It is possible to transfer saved data from the original Diablo II into the local single-player mode and continue from there.

Unfortunately, Blizzard has not eliminated all of the technical flaws that have plagued the game. It has been happening now and then that new problems have appeared up to this point. Some of these, in my opinion, have the potential to be game-changers. As we saw, individuals posting comments on the D2R message boards, asking assistance with the game’s Graphics Settings, were in great numbers. Their strong view is that wrongly configured graphical settings cause the performance issues they see in the game.

This is, in fact, the correct answer. The overall performance of the game has been seriously affected. In terms of click-to-move games, D2R is, without a doubt, one of the most challenging options.

On the other hand, some did not have any performance issues with the RTX 2060 and RTX 3070 graphics cards, which I found to be surprising. We are aware, however, that not everyone has access to a high-end graphics processing unit. People experiencing issues like frame rate drops and stuttering in Diablo 2 would benefit from reading this post since it will aid them in addressing their crashing issues. Let’s take a look at the guide right now:

As a starting point, it’s essential to understand that Diablo 2 Resurrected is not identical to the original Diablo 2, despite its use of the same code and underlying concepts. To put it another way, the first thing you should do is evaluate whether or not your computer system can handle the game’s primary and recommended PC system requirements. 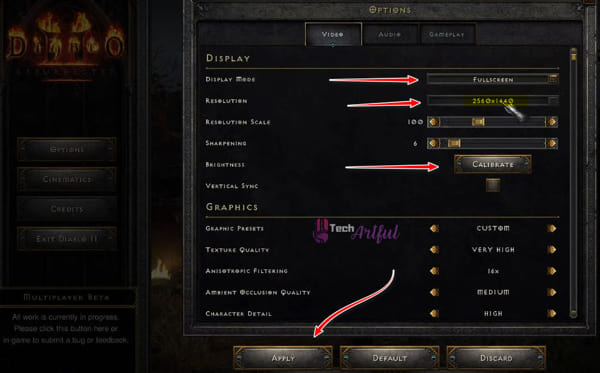 Then it would help if you adapted your expectations in light of the system specs. As previously noted, even gamers with the most recent RTX 30XX GPUs and the most up-to-date components are suffering significant performance difficulties, demonstrating that it is not always a matter of having the most powerful setup available.

This is shown by the fact that the game takes 26GB of hard drive space to be installed, indicating that the game has undergone significant changes in graphic and mechanical aspects in recent years. In comparison, the original Diablo II (together with the Lord Of Destruction expansion) was less than 2GB in total size when it was first published in 2003.

In most cases, it is advisable to run a game on a medium-end gaming rig first to figure out the optimal combination of visual settings for a game before investing in a high-end gaming rig.

The utilization of benchmarks on gaming systems equipped with high-end or enthusiast-level graphics cards is entirely pointless and has no benefit. 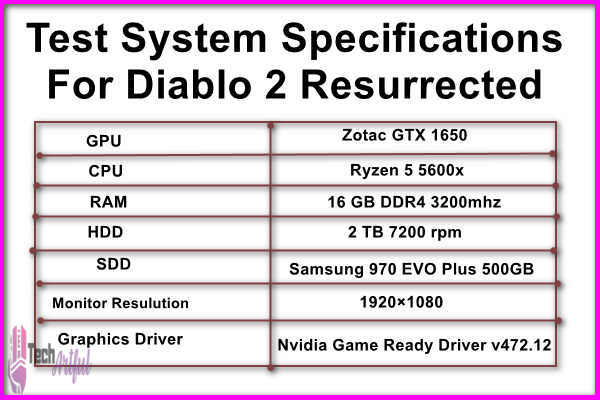 Every single game, without exception, will run flawlessly on either an RTX 3080 or an RX 5800 XT, regardless of the graphics card used.

Use AMD GPU for better performance

When playing Diablo 2 Resurrected at its highest settings, you might be startled to hear that the GTX 1650 is incapable of sustaining a continuous frame rate of 60 frames per second. While viewing the fresh photographs from a distance, they appear to be of excellent quality. Specific characteristics of the chickens may have been lost as they evolved from pixel poultry to more realistic fowl.

The same may be true for certain architectural elements as they evolved from pixel poultry to more realistic poultry. This more literal and improved replica of the original artwork has taken the place of its shocking simplicity, striking in its simplicity. The interface is certainly not a gimmicky design choice, and it is fascinating to note that you can switch between the new and old images at any moment. Even if you play with the settings regularly, you will never keep a continuous score of 60 on the exam.

After completing a considerable study, we discovered that this game performs far better on AMD GPUs than NVIDIA GPUs. AMD GPUs are significantly more powerful than NVIDIA GPUs. However, a graphics card like the RX 570 required your PC to get close to 60 frames per second. According to its developers, this game’s large number of complaints about low frame rates and occasional stutters, which have been received since the release of the Beta version of the game, has been traced back to a flaw in the game’s programming.

Performance difficulties will arise if you try and run the game on a low-end GPU, such as the GTX 1050, or an integrated GPU in your laptop. You may have to put up with a substandard performance for a while longer.

By reducing the Resolution Scale, frame rates may be increased, and this is the only option available for accomplishing this goal. After all, given the circumstances, why would anyone bother to play Diablo 2 in this specific edition of the game? It’s often preferable to play the Legacy version of the game rather than the original.

What resolution is Diablo 2 Resurrected?

This has a full 3840 x 2160 pixel resolution and runs at 30 frames per second. D2R in performance mode on the Xbox Series X. Its raw pixel count approaches 1440p, albeit a thick coating of TAA blurs it—and it looks nice enough to justify the boost to 60 frames per second.

Diablo 2: Resurrected is a complete remake of Blizzard’s classic hack-and-slash RPG. It has upgraded visuals, 4K gameplay, and all of Diablo II’s content.