GPU Fan Suddenly Loud is one of the most common issues among computer enthusiasts. If your GPU fan gets suddenly loud and you find yourself in this scenario, then try not to panic. It’s not quite as horrible a problem as you would expect it would be. You can fix this issue very easily if you follow this whole post carefully. 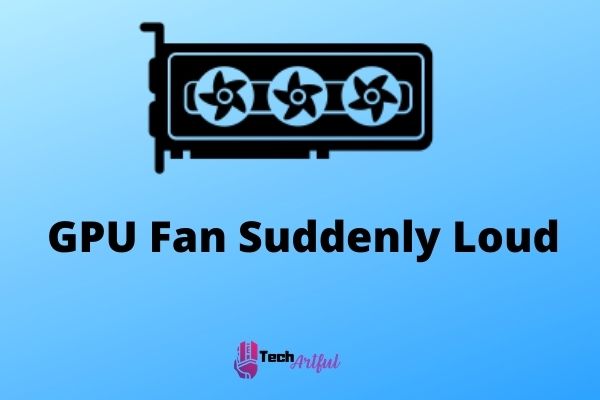 The sound of a noisy graphics card fan may be quite bothersome while you’re listening to music, streaming a podcast, or just relaxing while surfing the internet.

Luckily, repairing excessively noisy graphics card fans, on the other hand, is a piece of cake! This article is going to cover a variety of solutions that are known to provide outstanding outcomes. Each method will be discussed separately.

If you’re new to the PC world or an experienced enthusiast, this article will serve you as a one-stop shop for resolving the issue of a GPU fan suddenly loud.

Now, let’s get down to business.

What are The Causes of GPU Fan Suddenly Being Loud?

There are so many possibilities that may arise this problem. If you notice that your GPU fans are suddenly getting loud even though you are not doing any tough tasks, then it’s certain that there is something wrong with it. And if you don’t do anything, things may get out of hand. Hence, the following can be the main reasons behind the GPU Fan Suddenly Loud problem.

If you see that your GPU fans are making loud noise continuously, then the above possibilities might be the cause. However, if the GPU fans, on the other hand, become very loud, then rapidly decrease their level of noise before becoming extremely loud again, there can be some other reasons for this.

If you are experiencing the same problem, the following might be the cause:

Now start to fix the issue by doing some simple basic steps. It doesn’t matter which is the reason behind this problem, as long as you are doing fine. As soon as you have completed that, you may proceed to test the other possible solutions to see whether they work.

Fortunately, we have broken down the remedies for you step by step, so you can simply follow the instructions and resolve the problem without any difficulty.

How to Fix A Noisy GPU Fan

Now starting here, the following are the actions to take if your GPU fan is making a loud noise:

1. Clean the GPU and Examine for Loose Connections

If you live in an urban area, then it’s only natural that your room will be covered in dust. So, if you see that your casing along with the GPU has become very dusty, then GPU Fan Suddenly Loud issue won’t be any surprise anymore because there will be a significant amount of dust and dirt to build within the fan or heatsink. In this case, if you just clean the whole CPU of yours with the GPU, the problem should be resolved. 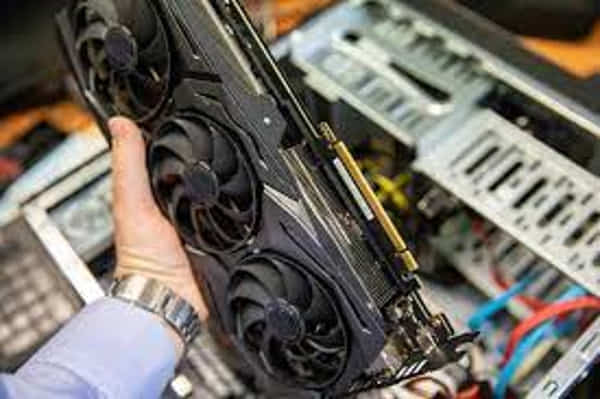 However, in some cases, it’s possible for the wires going up to the GPU to become loose. And because of this, it can lead to a slew of problems arising.

So, to solve the problem, follow the below steps.

You may now clean the GPU fans and heatsink in the same way that you would clean a CPU cooler. If you have an air blower, then the process will be very easy. You can just blow all the dust away. But if you can’t afford one, you can use a brush to clean it.

Once you are cleaning, reinstalling it should be as simple as going through the process again. After reinstalling the GPU, turn your computer on and check if the problem remains or not. If it does, just go through the following methods.

This is a very basic and easy way to try fixing the GPU Fan Suddenly Loud issue. Sometimes an old version of GPU drivers may cause this problem. In this case, you can just update your GPU drivers and rule it out.

There are many ways to update GPU drivers. You can use any third-party software to update, like IObit Driver Booster or something like that. But I prefer this one. However, if you don’t want to go through the hassle of installing any third-party driver updating software, then you can do the job manually.

You may upgrade your drivers via the device manager, or you could just open the OEM graphics card program to scan for and install the most recent updates to your graphics card drivers.

If you somehow modified or changed the GPU fan curve, then this problem may happen. Or also, it’s possible that the default GPU fan curve isn’t functioning properly. As a result, you must apply your own fan curve in order to solve the problem.

So, in order to do this, follow the procedures outlined below: 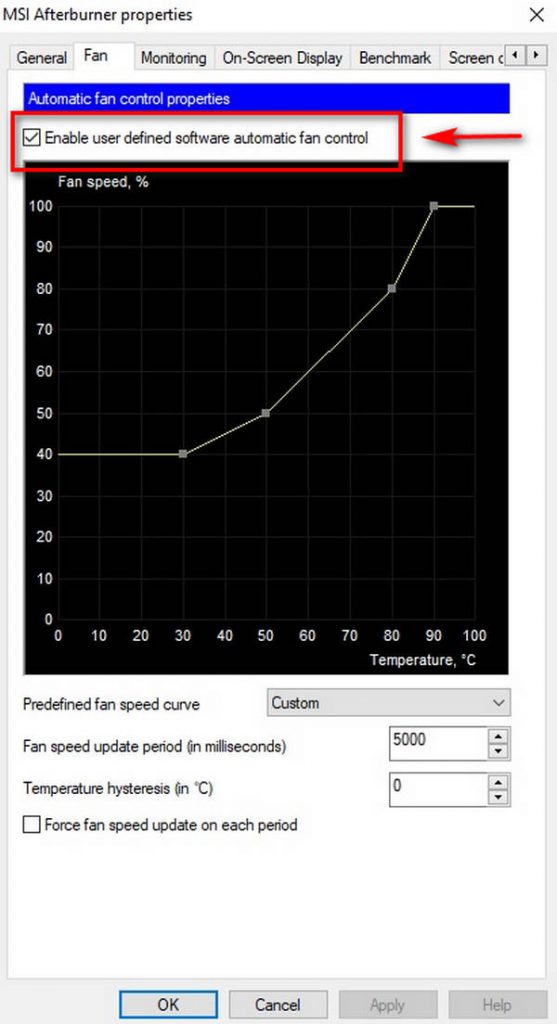 Now, here you can see, the fan control function has already laid out some curves for us, along with the setpoints which can modify the fan’s speed when the GPU exceeds an acceptable level of temperature. While this is advantageous in terms of efficiency, it is not necessarily the most effective method of reducing volume.

When you use the MSI Afterburner software, you will be able to check the temperature of your GPU while simultaneously decreasing the speed of the fan, allowing you to discover the optimal balance between fan noise and GPU temperature.

But, do not ever make significant changes to the curve from its original condition. The GPU will overheat and damage if you do so. You’d want to experiment with little tweaks to see whether they have any effect on GPU fan noise or not. MSI Afterburner is automatically launched on Windows starting by default. However, it’s a good idea to double-check this.

Now, in order to check if this is working or not, try to play a few games to determine whether everything is working properly.

If you see that the GPU fan loud noise problem still remains, you should use MSI Afterburner software to take a look at the fan speed and temperature.

If they are not responding to the values you have selected, it is possible that the fan speed sensor has been broken. In that case, it’s a good idea to make a claim under your warranty or take it to a specialist to be repaired.

But if the GPU fan speed and temperature are responding with what you have selected, and yet the fans are still noisy, proceed to the next method to investigate further.

If you have all the procedures above but still have the GPU fan suddenly loud noise issue, then there might be some hardware problems that need to be considered. The common problem is that the fan bearing does not function as planned. Because the fan is a form of kinetic energy, it’s extremely likely that the fan bearing is now out of commission.

In order chack the fact, remove your graphics card and rotate the fans with your fingers to see if this is the case. The fan bearing may be faulty if you notice any inconsistencies in the motion of the fans or if one fan seems to be traveling in a different direction from the other fans.

If that’s the case, you should replace the GPU fan with a new one in order to remedy the situation. It is not prohibitively costly to purchase new graphics processing unit fans.

To be safe, it’s best to request an RMA if your product is covered by a warranty. Otherwise, doing something on your own can be can rise a new issue.

However, one further hardware problem is that the graphics card fan is not adequately installed or screwed in place. You may attempt to repair it by yourself, but as I previously said, if your product is covered by a guarantee or warranty, you should contact the manufacturer for assistance instead.

When you leave your fan bearings unlubricated and loud for an extended period of time, they can become very loud while rotating and irritate you. When dealing with potentially noisy fans, it is simple to give your bearings a little more oil. We are guessing that you have followed all the instructions outlined above but still haven’t solved the problem yet. Otherwise, don’t try to do this step.

You can buy oils from a variety of providers, but use caution since putting oil on the printed circuit board (PCB) or motherboard might lead to further issues. The fact that this procedure falls into the final category of outcomes does not minimize its ability to provide excellent results when done properly.

Because of the fine lubrication, the bearing will spin like butter. And the smooth sound it provides will be very satisfying. But as we said before, be extra cautious while pouring oil, as it may damage the board if you drop oil on the circuit.

Is it wise to raise the GPU’s fan speed?

Increased GPU fan speed is beneficial since it allows for greater ventilation and some reduction in temperature as well. On top of that, if you overclock your GPU, you will need to raise the GPU fan speed in trying to adapt to the higher temperature. But raising the fan speed too high will result in excessive sound and can lessen the lifespan of the fan bearings.

What is the normal GPU temperature while gaming?

Is it better to keep my GPU’s fans on auto?

As long as you are not overclocking your GPU, the default settings are OK. The auto settings have been fine-tuned to work with the standard clock speeds, so everything should be OK.

GPU fans getting suddenly loud is one of the most common issues among gamers and even normal users. But there are a lot of methods available to solve this problem. In this article, we tried to show each and every way to do that. We hope that this post has helped you to solve your GPU Fan Suddenly Loud issue.